Before moving to London in 2012 we lived on the Åland Islands, population 28,000 and with a similar population density to Orkney. Bearing that sense of scale in mind and with London large and sprawling and Orkney surrounded by the sea, we decided to limit our mapping to an area containing the same population as Orkney, c 21,000.

In London this is, on average and approximately, an area a mile by a mile and a half. We drew a rectangle, of similar proportions to one drawn around Orkney, and centred it on Kirkwall Place in east London. We mapped the stops on the Imaginary tours of Orkney from Elsewhere itinerary by eye then explored like this:

We flew to Kirkwall via the District and Central Lines (listen here), touching down at the Bethnal Green terminal and proceeding directly to Kirkwall Place. 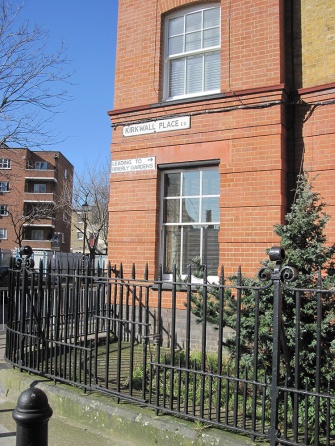 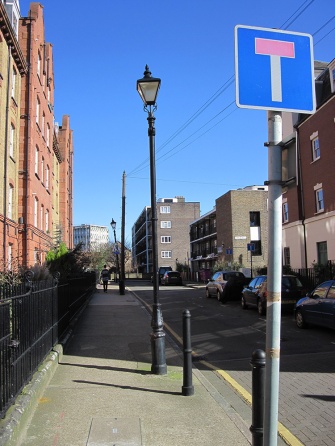 We found some rock and other art and stopped at the Camel for refreshments and eavesdropping. “So what did you have for breakfast?” “sourdough and avocado”, “well that’s the thing isn’t it, it’s great here now, people like you move in, it was a dump before”.

We spotted two other people who may or may not have been mapping Orkney. 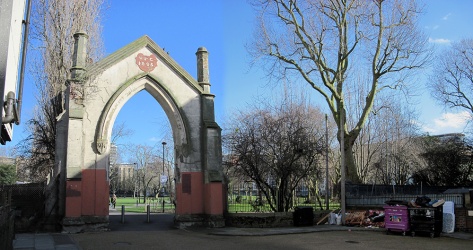 We headed towards Kirkwall Airport, at the south-west corner of Meath Gardens, where we photographed a rather magnificent Gothic arch. Happy to find souvenirs so early on in our journey we acquired a plywood suitcase, Day of the Triffids and The Midwich Cuckoos from a rather carelessly constructed cairn beside Mary MacArthur House. Close to the airport we recorded local wildlife, signage and earthworks and the broch on Usk Street. 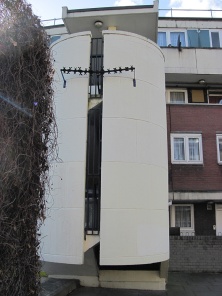 We continued northwards towards Victoria Park and, skirting what might have been the edge of Ingerness Bay, spotted a rugged little pony. 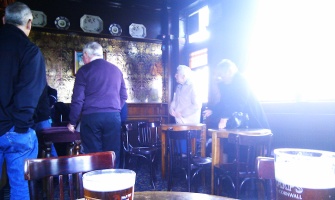 At the Palm Tree, for further refreshments, we again eavesdropped on locals: “years ago, when I was a kid, yeah, during the air raid when the doodlebugs was about, we lived in a house that had an Anderson shelter out in the yard and it had a big tree there and when we used to go down, it was all, and you used to have a bit of string, when you all got in there and you were holding the bleeding string and you used to hear them doodlebugs, and all of a sudden oh damn it, that ff! It’s the tree!”

Revived, we continued onwards past further earthworks and waterscapes; 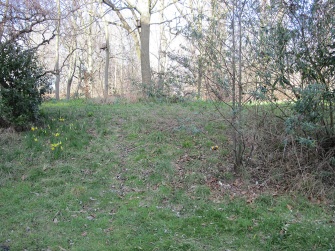 … we even spotted a whale.

On entering Victoria Park we discovered more islands, a Ring, a mystical grove, 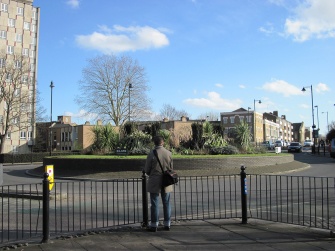 one of which was surrounded by a semi defensive moat.

Emerging on the northern side we headed westwards and, nearing the coast we reached the site of four Great Rings. Turning south we searched for Skara Brae in Temple Street and though the settlement did not take the form we were expecting, imagining and hoping for, by its angularity and simplicity of form we did believe we’d found it. 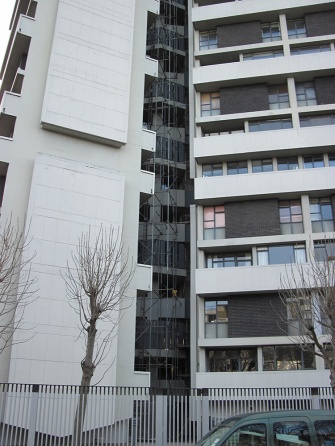 Though we’d found Rings in several places before, the actual Ring of Brodgar should have been somewhere near the corner of Old Bethnal Green Road and St Jude’s Road. In fact, it appeared on Middleton Green.

We took a photograph but were beginning to attract attention so decided to head onwards towards Old Ford Road in the hope of finding a seascape to photograph. 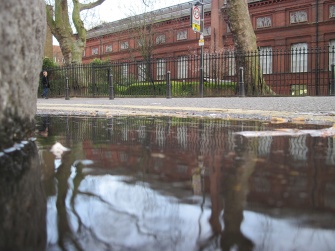 Footweary and thirsty, the search for Helgi’s took us to the Gallery Cafe at St Margaret’s House, which sounded so nearly like St Margaret’s Hope that we assumed it must be the right place. No cocktails were available but the local ale proved a fine substitute. 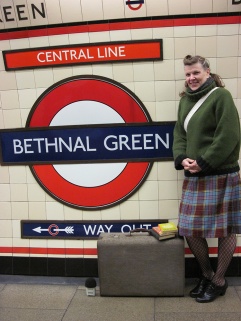 Our exploration of Orkney from Elsewhere took about 4 hours. Tired but happy and with other places to explore we flew westwards from Bethnal Green, into the city, with our souvenirs.

by Lara Band and Dave Webb

There’s a 2002 headline from The Onion that satirises the recurrent role of archaeologists in pop culture: “Archaeologist Tired of Unearthing Unspeakable Evils”. In the article, the “unspeakable evils” have taken the shape of giant rats, ophidian women, Mayan coyote spectres and walrus bone women.

Aside from the exoticism of the manifestations, any pop culture aficionado will recognise the pattern: in handling a mythical, long-hidden object, or in disturbing the dream of the dead, the fictional archaeologist inadvertently summons an otherwordly force seeking revenge. Why has this portrayal become a trope, why does it resonate with the audience? Although the consequences of these interactions are almost invariably negative, their essence is, to me, a great depiction of Mythoarchaeology. 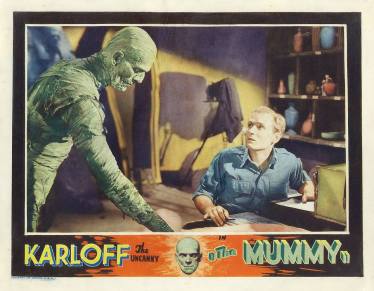 My fascination with archaeology started with the myths my father told me when I was a child, and my favourite was that of the Minotaur. When I learned that Crete, the home of Asterion, appeared on the maps, something clicked: this was different to other tales I’d heard, this was somewhat more real. When I looked at my father’s books and saw ancient artifacts depicting Theseus fighting the bull, I was mesmerised. These ancient objects had a magical quality: they came from a time that was closer to the mythical world I’d imagined. Many years later, when I first visited Crete, the ruins of Knossos became a portal between this world and what had inhabited my imagination for decades, and the experience was almost numinous.

There are many ways in which we might react to a place, or an artifact, in an emotional level, as Rob Irving and I discussed during our Avebury walk. Sometimes it’s an object that casts a spell: the Egyptomania that followed the discovery of the tomb of Tutankhamun was perhaps a consequence of the extraordinary state of preservation of the objects found, and the fact that they had remained untouched for centuries. Sometimes the process starts with a myth or a story that speaks to us and culminates with a pilgrimage to the place linked to it. The place of destination may have been considered sacred for centuries, or perhaps is only sacred in our imagination.

The journey to a sacred destination is a spiritual experience, and the supposed existence of an invisible line connecting these places is a manifestation of this idea. In pilgrimage, we’re told, the journey is more important than the destination, a way of self-discovery. By taking an ancient path, we re-enact what our ancestors did: the journey itself is the portal to the past. When we arrive, we perform our ritual: we touch the stones, we sit on the ruins, as if they were able to reveal their secrets to us.

Jeannette Winterson says that the past is another country; I’ve always thought of it as an Otherworld. There’s something haunting in ruins, not necessarily milleniae-old ones like Knossos or Avebury, but also more recent ones. They’re remains of something that isn’t quite there, but that can be summoned by our imagination. Objects and ruins become tokens, thin places or portals to an Otherworld. Remains of the past are the closest we’ll ever be to it. 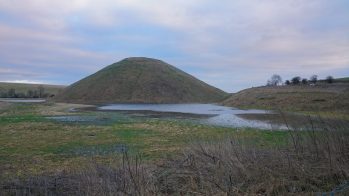 When the pop culture archaeologist finds one of these thin places or manipulates one of these tokens, the Otherworld gets loose. Evil energies make great adversaries in fiction, but there’s another reason for which these stories may resonate with audiences: what comes from this Otherworld has already crossed a threshold. Despite our curiosity, we’re inherently scared of what may come back, of the thing that knocks on the door in The Monkey’s Paw, of whatever is summoned by an old bone whistle. The souls that return know the secret that has haunted our imagination since the origins of civilisation: what lies beyond the threshold of death. In pop culture, the figure of the archaeologist, then, is that of an unwilling shaman, a mediator between this world and the other, and a shaman’s role has always been essential to the tribe.

Link to The Onion article: