Hope you enjoyed the brief tour of artefact homes. Thank you to those of you who offered feedback and encouragement, it certainly seemed to interest people!

Tomorrow I’m going to be doing some fieldwork with the Bristol Wood Recycling Project, so there won’t be a post and I’ll be tweeting instead. Either on Sunday or Monday and into next week, I’ll complete the eBay half of my PA2015 month by addressing my failure to engage any actual eBay sellers in my research and making some suggestions as to how eBay still has some potential to be considered public archaeology, despite my lack of qualitative data. As I’ve said before, I hope the ‘failure’ bit can be more of a discussion, it’s not a subject we hear enough about.

Firstly though, as we have had our leisurely tour around Britain (and overseas…?) seeing where eBay-listed items reside, I want to briefly present some thoughts on the data itself. It’s not necessarily a prime concern of mine, I’m more into talking to people, but if eBay is ever to be used in a meaningful way, it will entail some level of data analysis, so I might as well present a bit.

As we see in this lovely pie chart, Roman coins make up nearly half of the available data. Spindle whorls have a good go in second place, followed by lampposts and musket balls. Jettons and clay pipes bring up the rear. Is this to be expected? It seems to make sense that there is a more established trade in valuable Roman coins, while spindle whorls can be attractive in their own way. Clay pipe fragments are probably the most common accidental find, but I suppose people just don’t think of selling them.

Objects on the PAS 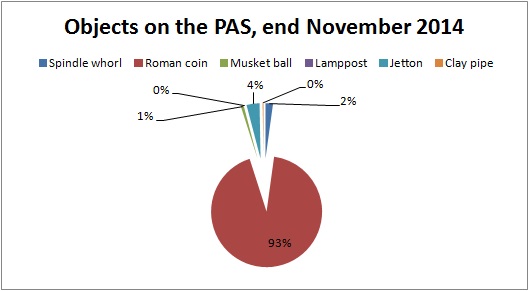 Sample objects recorded by the PAS, as of end November 2014

Contrast that with the PAS data. This pie chart, looking uncannily like the old Happy Eater logo, shows Roman coins as by far the dominant artefact type with everything else paling in comparison. This makes complete sense and in fact highlights one of the ways in which eBay and the PAS are not quite equivalent datasets. Roman coins are far more likely to be recognised as being of interest and added to the PAS than, for instance, clay pipe fragments and I suspect the PAS could not survive if it was constantly recording the latter. However, the proportion of Roman coins to jettons is not too far off in both sets of figures, suggesting that although the PAS favours certain artefact types, there is correlation between those types in that and other public-driven contexts.

What does this mean for public archaeology?

Leaving aside for a moment the problems of the sale of potentially important artefacts, it would seem from this data that Roman coins are a key artefact to focus on if we want to contact sellers and understand the movement of objects in and around eBay. However, I tried another bit of analysis that tells a slightly different story. Please note that this analysis was the result of literally minutes work and may well not stand up to close scrutiny!

You will have seen from my Homes of eBay posts that I calculated the percentage of PAS material on sale on eBay in one month and also how long it would take eBay to sell an equivalent of the PAS database for each object type. These are two different versions of the same data. In analysis, I turned each of these into relative values by ascribing a maximum of 100 to the highest values and rating others accordingly. So, in terms of amount of material on eBay, clay pipes score 100 as the amount recorded has the highest percentage in relation to the PAS. In the other column, Roman coins score 100 because it would take longest for eBay to sell an equivalent amount of material. Subtract the second value from the first and you have a series of relative values that show the potential for different types of eBay object to help us understand the relationship between people and historic-archaeological objects. 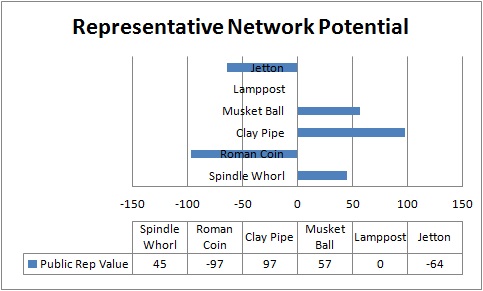 This graph tells us a different story to the pie charts. Roman coins, by far the most frequently recorded item on the PAS and listed item on eBay, get a Public Representative Value* of -97. In short, there are a lot of this kind of object, but eBay won’t tell you much about the people-object networks of Roman coins because it only holds a tiny sample. On the other hand, clay pipes have the opposite value. There are a relatively small number, but it’s a higher percentage of the PAS and replicates the PAS every 18 months. So, these two quite different datasets become comparable, not in pure numbers or why people use them, but in terms of their potential to tell us about people and their objects.

If you want to know about members of the public who are part of the networks of Roman coin movement, don’t bother with eBay, consult the Portable Antiquities Scheme. If clay pipes or musket balls are your thing and you want to understand how people interact with them, forget the PAS and try to get eBay sellers to talk. I hope you have better luck than I did.

I promise it makes sense. Hopefully I can replicate the experiment at some point with a larger dataset and some people to talk to.