This month of PA2015 will look at the ways in which relatively mundane objects move around and what that has to do with people. It has long been a contention of mine that archaeology and archaeologists have a particular perspective on material culture that enables them to locate, understand and describe active, contemporary material networks in a certain, distinctly useful way. Further, I think that understanding material networks with an initial focus on the object being moved can tell you about the relationships between people and other people, things and places that other more widely focused perspectives cannot. Lastly, I think that communicating this understanding to people can give them new ways of engaging in contemporary politics (which means a lot of different things).

Where is the public archaeology?

In this conception, there are two different public archaeologies. The first is found in the archaeologist developing these themes and methodologies, then working to create ways to communicate them to non-archaeologists. The second, both equally and differently important, is in non-archaeologists finding some use in approaching aspects of their lives in an archaeological way. These two public archaeologies meet in the middle, but do not have to operate together. One does not have to lead to the other in a direct fashion. People can take inspiration from archaeology in any way they want to and I see the potential to create another kind of archaeology that might be useful and to make it visible so it can be appropriated.

This month will split into two parts, the first focussing on eBay, the second on recycling. I’ll come to the recycling later in the month.

EBay has massive archaeological potential, both as a fluctuating repository of material culture, but also in what it might tell us about the relationship between people and objects. I’ll be chucking a few stats around over the next week, but let’s start with a few jaw-droppers. 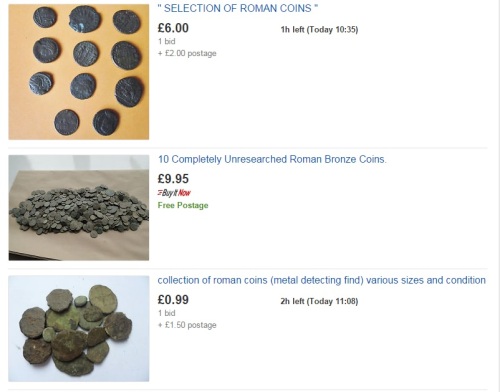 So, where can eBay and public archaeology meet? When I tell people about this project, they hear the word ‘eBay’, smile and shake their heads. EBay is, in my experience, treated by archaeologists as a whole, and as a negative phenomenon. It’s where people sell metal detecting finds, right? Well, yes. But it’s also a normal part of millions of people’s lives and one of the primary ways in which objects move nationally and internationally on a person-to-person basis. So, it can tell us a lot about how things move and who is involved in moving them, this in addition to the almost unimaginable rolling dataset of 112300000 objects.

Working with the data

I can go into this in more detail through comments if anyone is interested. Basically, some years ago, eBay got annoyed with people scraping their customer site and slowing it down; they took people to court over it. One of the ways they have addressed this, realising that people using scrapers to categorise data drives more business through the site, is that they replicate their entire database on a secondary site and allow you to set up tools to extract information. Basically, you can set any parameters you want and collect information within them straight into an Excel file.

So, with a lot of help from my brother-in law, Andy Venables (he did 100% of the IT set-up), I ran a scrape of eBay.co.uk for the whole of November 2014. I collected data on every listing during that month on six representative artefact types: Jetton; Clay Pipe, Musket Ball, Spindle Whorl, Roman Coin and Lamppost. That scrape recorded 828 entries, which reduced to 605 after removing re-listings and misidentifications. For one month, it’s a workable dataset. Any PAS figures I refer to were gathered at the end of this period too.

Next week, I will do some work with the data and investigate the potential for eBay to play a role in the development of public archaeology. Also though I want to address my failure to engage any eBay sellers in my research! I’ll need people’s help with that bit, it needs to be a conversation and I look forward to having it with you.

Before that, over the next week, I simply want to introduce you to the data and, by extension, to the idea that eBay isn’t merely that bad thing over there, it’s loads of different people doing the same thing for different reasons. I’ll get going the day after tomorrow.

5 thoughts on “Can eBay be public archaeology?”