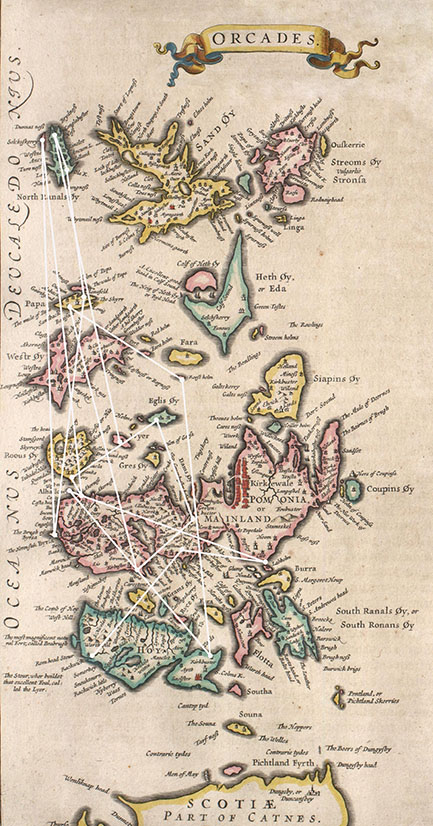 When, after my commute from Stromness, I arrive at Orkney Library and Archives in Kirkwall the journey begins. Travelling in my workroom I can cover astonishing distances, Papay and North Ronaldsay before tea break, Hoy and Wyre after lunch. Visiting places fleetingly or sometimes lingering longer, I do this through the photography of Gunnie Moberg.

I decided to map the photographs in Gunnie Moberg’s first publication Stone Built published in 1979 by Stromness Books and Prints (which happens to be the shop I live above and where my physical GPS mapped journey began).

To trace this journey I used Blaeu’s 17th century map of the islands, one of the earliest maps of Orkney. The map holds its own peculiarities so plotting some of the sites was tricky, but happily the map features Sule Skerry as being right next to North Ronaldsay (rather than 60km west of the mainland) so I was able to plot the lighthouse without falling off the map. Because of the early nature of this map, the shape plotted by going from point to point, in the sequence dictated by the book, will be particular to Blaeu and quite different from accurate co-ordinates. This seemed to fit the geographically irregular and deeply satisfying journey of Stone Built.

‘It seems positively unnatural to travel without taking a camera along… The very activity of taking pictures is soothing and assuages general feelings of disorientation that are likely to be exacerbated by travel. Susan Sontag 1977, On Photography’ 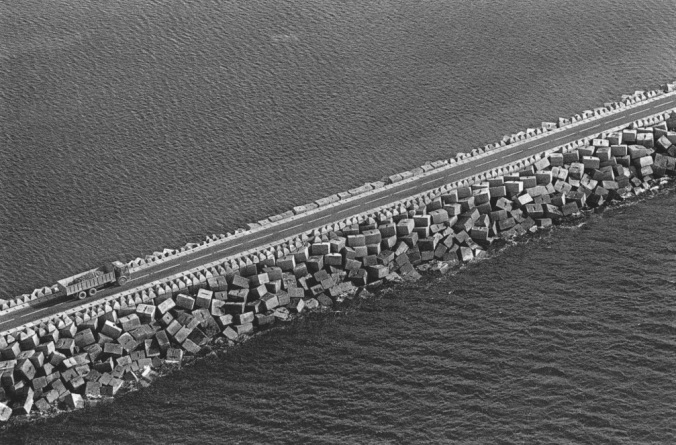 Chickens fed, I set out from the yard to the Kirk’s World Day of Prayer. The ‘Green Isle at the Heart of Orkney’ joining forces with believers in the Bahamas and other liminal and not so liminal places.

Hands stretching out to each other around the earth – feet washed miles apart – in joint acts of humility….

…..journeying alone after – to the older, abandoned Kirk, I wonder what such a service might have meant to that congregation. Their prayers, though different, were not presumably in vain. The roofless structure inspires me to gaze up into the big Orkney sky and to expect no limits. What did they ask for? Do we have it – yet?

…..pausing near the War Memorial to view once-connected Helliar Holm, I ponder the ancient chapel remains there – imagine blessings still being passed down – our inheritance from those long silent lips which once petitioned Heaven…..

…….. passing preparation for next day’s ploughing match I am reminded that we so often reap a wonderful harvest from the good things sown by those who were here before us…..even the lovely carpet of spring flowers in my garden is not of my doing.

Returning from this mini pilgrimage, I sense today we joined hands not just across our world but also with many previous generations of faith on this peaceful isle. Maybe the huge answers they believed for but never saw – will gloriously burst forth in today’s Shapinsay and truly amaze us!

A typical day in the taxi never knowing where my journey will take me and who will be my traveling companion. Sometimes they are regulars and we have a few minutes to blether and catch up, other times it’s someone I’ve not met before, and like speed dating on wheels I have a limited time to find out about their story!

My photo is a large panoramic print that’s approximately 100 years old. We were given it as a present nearly 20 years ago and told it was Scapa Flow in Orkney. We had for many years wanted to visit Orkney, and when we finally did we brought the picture with us to find the location, and quickly confirmed it was not around Orkney after all and also noticed it was inscribed ‘Wei Ha Wei, China’. Nevertheless, we loved Orkney and 9 months later had moved here. The picture, therefore, is an imaginary view from Houton Tower which I visited on the way home on Saturday. 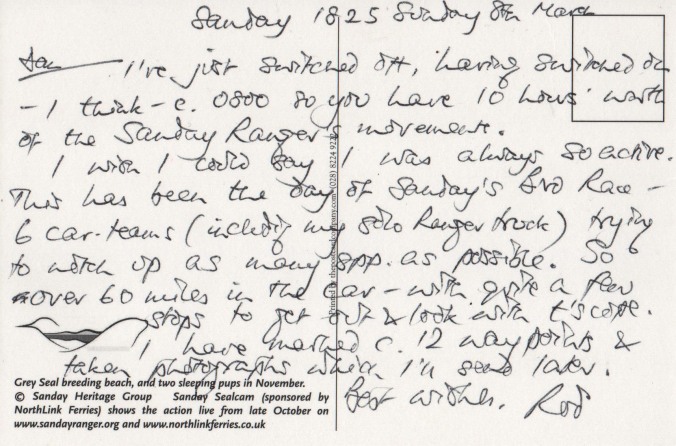 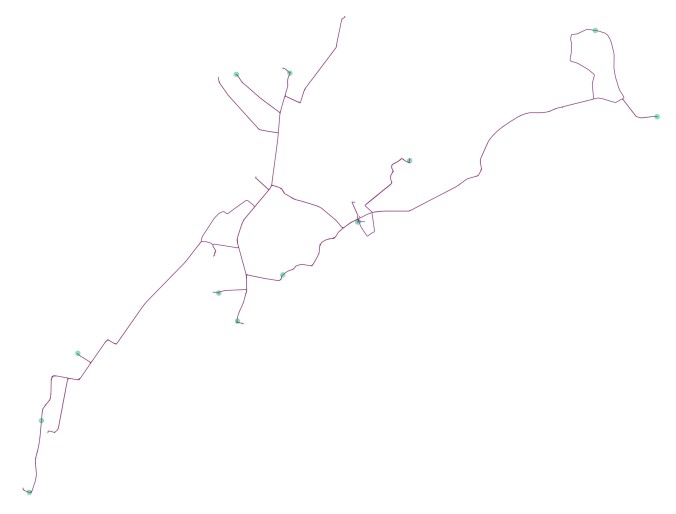 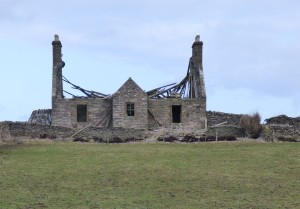 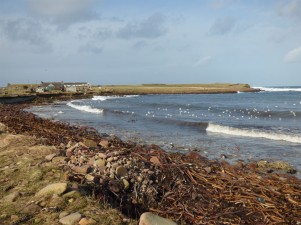 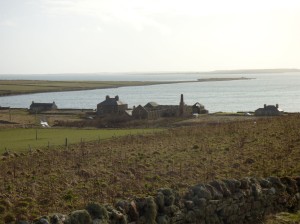 The track I have recorded is the route that I am fortunate enough to have as my regular morning walk. It is popular with dog walkers and nature lovers and also has several points of interest relating to Orkney’s more recent heritage.

Starting from the car park at the North end of Churchill Barrier Number 4, we immediately come upon the enigmatic wooden statue gazing out over the bay. No one seems sure why he was put there and by whom but he stands watch over a popular summer picnic site. 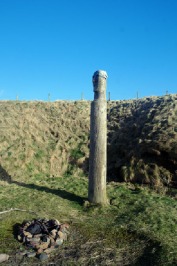 Continuing South along the beach we encounter the remains of the Canaller one of the block ships sunk to protect Scapa Flow before the Churchill Barriers were built. Unlike many other parts of Orkney where coastal erosion is a problem this dune and beach area has formed due to the accumulation of sand since Water Sound was blocked by the Barrier. Photographs from as recently as the 1970s show large parts of the hull of the Canaller exposed, now entirely buried by the accumulating sand.

Leaving the beach and walking along the Honey Geo road, we pass the remains of a World War II searchlight emplacement which has ingenuously been converted into a storm resistant garden shed.

Immediately beyond lies the remains of the Coastal Battery which the searchlight served. The battery is now somewhat incongruously situated amongst modern housing but is well preserved.

Further along the road a signposted track takes us back to the beach. Turning left we head back along the shore towards the Barrier. On the way we pass the ruins of New London, one of a group of three former fisherman’s cottages.

Continuing along the beach in front of the Coastal Battery we come across the remains of another searchlight emplacement precariously perched on the beach, its foundations eroded by the sea. 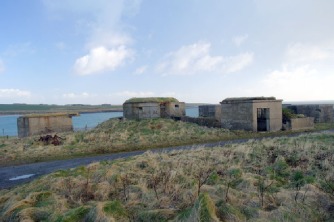 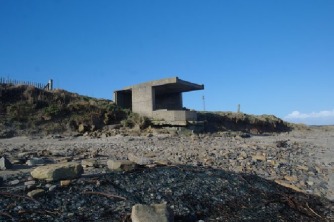 Re-entering the dune area we can look across the Barrier towards Burray and then follow one of a number of informal paths zig-zagging through the dunes. Although this landscape is of very recent origin it provides a habitat for several varieties of coastal plants which in summer provide a colourful carpet of flowers to walk through on our way back to the car park. 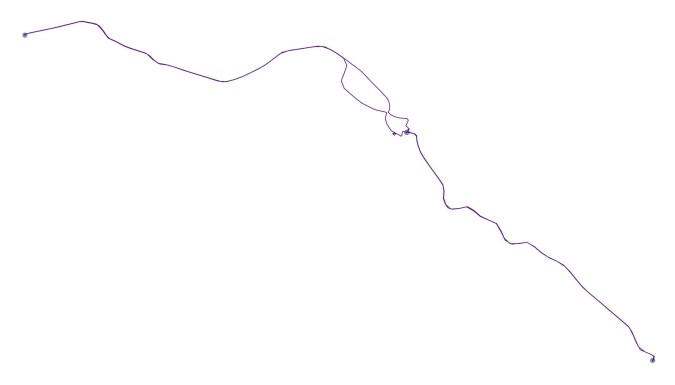 Moorside to St Andrew’s and back.

Wind, weather and walking, or not.

My mapping day on Graemsay dawned with an average wind speed of about 47mph with gusts about 60 mph.  But, undaunted, I donned waterproofs and wellies, with GPS firmly in a pocket and set off first to feed my hens at Sandside.  I could barely stand up and they were getting blown about, so no photo opportunity there. The stone hen house is part of the old farm buildings and gets some shelter from the wind. The 5ft garden dyke that leads to the buildings also helps, especially as I’m quite short! But as soon as I get away from any shelter I’m nearly blown over.  Not the time for a walk along the shore yet then.

I retreated to the warmth of home and stared glumly at the Orkney Harbours wind speed graph and peered hopefully out of the window.  Eventually, at just after 3pm, the wind dropped to a mere 38 mph, though gusts were about 58 mph. Plan B would have to be put into action,  I’d have to drive round the island rather than walk.  Getting out the house was the easy bit, getting into the car and still retaining the car door was the challenge.  I couldn’t shut the car door while I was inside, so I did consider opening the window, shutting the door from the outside and scrambling in through the window. But then I had visions of the photo opportunity for Facebook this would provide my neighbours if I got stuck and decided I’d retreat inside until the wind moved round a little.  A bit later,  I set off down to the main Graemsay pier, where the waves were crashing against the stone. Our ferry services had been cancelled for the day!

Back up the road, past Sandside house and a stop at waypoint 1, the old pier built to transport the stone when the Hoy Sound High and Low lights were built in 1851.  There is a beautiful shell beach on the other side, my favourite place on Graemsay, I walk there whenever I can, but not today, sadly.  It had to remain out of sight, a treasure not to be shared on this trip. 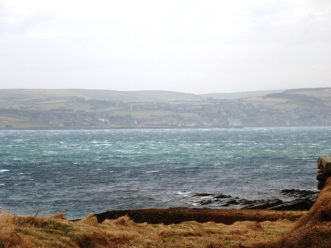 Further along the road and Waypoint 2 is the sandy beach at Sandside. Generations of children have played here, made sand castles and sand angels and swum in the shallows.  Even I have managed some bare feet paddling in the summer. 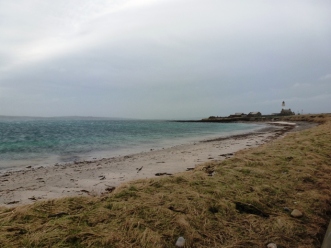 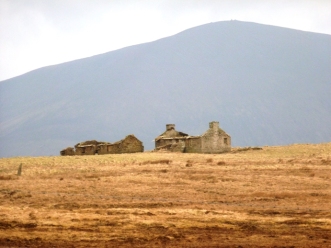 Then, a slow drive up the hill past the old Manse, on past the Quarry, to look towards the dark mass of the Hoy hills.  The ruin on the croft of Dean stood starkly against Ward Hill.